Having previous attended various events, including TD AmeriTrade, Charles Schwab, Online Trading Academy, and even WarriorTrading.com, I can attest that learning chart patterns will help relieve your stresses by knowing movements on day to day or for future stocking pickings.  #Trading #Stock #ChartPatterns #Analysis

Even if you are not the chart or technical experts, you can utilize several existing chart patterns to identify key movements. These movements may not be obvious, but to many technical chart experts, they can be identified.

Please note this article is quiet lengthy so you can use these quick links to go to bottom, middle or top page of the article.

A bearish signal, the pattern is normally observed as a continuation pattern in a down-trend but can be a powerful reversal signal when encountered in an up-trend.

Rectangle pattern is one of the most common used technical analysis patterns. The rectangle pattern is formed when you have two specific levels where the market bounces from. In other words, the sellers are in control at the top of the pattern, while the buyers are in control at the bottom. The resulting back and forth action produces a rectangle-shaped pattern that is instantly recognizable, especially on higher time frames. After the break-out price will move at least  the high of the rectangle shape (upwards or downwards depending on traders).

Flags and Pennants
Bull flags are continuation chart patterns found within an up trending market. They are formed after a steep price advance by two tight parallel down sloping trend lines in a near 35-45 degree angle. The pattern is confirmed on a upward breakout of the bull flag.

Bear flags are continuation chart patterns found within a downtrend. They are formed after a steep price decline by two tight parallel upward sloping trend lines in a near 35-45 degree angle. The pattern is confirmed on a downward breakout of the bear flag.

Bullish pennant  just as with the Bull Flag the pennant portion of the pattern can be either pointed straight ahead or downward and the pole is formed by the move upward which sets up the pennant shaped consolidation.

Bearish pennant just as with the Bear Flag the pennant portion of the pattern can be either pointed straight ahead or upward, and the pole is formed by the move downward which sets up the pennant shaped consolidation.

Double Top & Double Bottom
Double bottom is formed at the bottom and indicates the end of a falling market. This pattern is identical to the double top, except for the inverse relationship in price. The pattern is formed by two bottoms separated by a top. The confirmation occurs when the price goes above the top or the confirmation line. Most rules associated with the double top formation are also applicable to double bottom pattern. 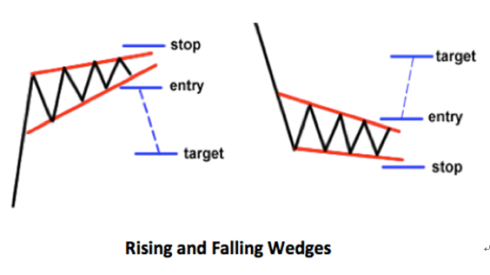 A rising wedge needs at least four ‘touches’ or tests of a trendline to confirm the pattern.  Generally, upon the fourth touch (or test), we would want to be waiting to enter on a breakdown of the lower trendline and place a stop above the upper trendline. The wedge is a consolidation pattern, and as such, we would expect to see the volume trend decline (reduce) as either the Rising or Falling Wedge pattern develops, and then expand as price breaks outward from the pattern.

For a falling wedge the conditions to analyze the pattern are the same as rising wedge.

The Head and Shoulders Top is an extremely popular pattern among investors because it’s one of the most reliable of all formations. It also appears to be an easy one to spot. The first point – the left shoulder – occurs as the price of the financial instrument in a rising market hits a high and then falls back. The second point – the head – happens when prices rise to an even higher high and then fall back again. The third point – the right shoulder – occurs when prices rise again but don’t hit the high of the head. Prices then fall back again once they have hit the high of the right shoulder. The shoulders are definitely lower than the head and, in a classic formation, are often roughly equal to one another. 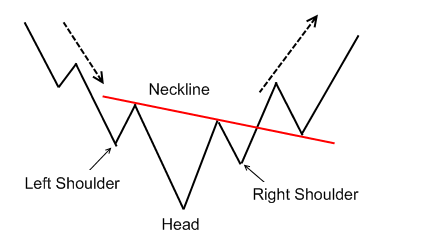 This pattern is a flipped Head&Shoulders pattern, i posted a pic. so that people would know there is the Inverted Head and Shoulders, characteristics are the same.

Technically speaking, a cup with handle is a rally to a new high, a decline of 20 -50 percent over 8 -12 weeks, a rally falling just short of the new

high level, a second decline of 8 – 20 percent over 1 – 4 weeks followed by a breakout to fresh new highs on strong volume.Like most technical patterns, the cup with handle pattern is really little more than a variation of another technical pattern.  In this case that pattern is the double top.  The pattern begins after a well-liked stock rallies to a new high following a positive fundamental development.  As the stock surges investors feel increasingly comfortable paying higher prices but there comes a point when the “story” of the stock fails to convert new believers.  Slowly, the stock begins to drift lower as those seeking to lock-in profits outnumber those intrigued by the story.  Although most of the fundamental news is still positive, many investors begin to question if the stock really is worth the prevailing market price and over time a substantial decline begins.

This process creates an important technical peak (top#1).  As the stock nears a twenty percent decline from the recent highs (this decline could reach fifty percent in bear markets) buyers begin to reassert themselves and the stock stabilizes and a reaction low occurs.  From this point forward, the bias begins to tilt gradually higher.  During this phase the stock may be the subject of positive Wall Street analyst comments, a new product announcement or legal victory.  As the rally gains steam sentiment improves dramatically and new buyers begin to talk about certain new highs but those that purchased the stock at or near top#1 get ready to sell.  These investors may have been waiting as long at 12 weeks for an opportunity to sell their positions without incurring a loss and they are not dissuaded by all of the new found bullish talk.  Just short of the old highs at top#1 aggressive selling begins on no specific news but in reality some investors that bought near top#1 have already begun to sell.  The stock begins to work significantly lower on increased volume creating a second, well defined top (top#2).

This large U-shaped pattern may look like a typical double top but for the purposes of this pattern, it is called the cup.  Noting key resistance at top#1 and top#2, speculators begin to initiate short positions.   From a technical perspective, this is a very important part of the pattern.  If the stock gains downside momentum and volume continues to increase, this could very easily become a double top but as the price works lower, volume slows, sellers seem to be losing the upper hand.  At this point more positive fundamental news is released and the stock price rallies.  With selling pressures satiated and the flow of fundamental news decidedly bullish volume increases dramatically and the stock works toward a fresh new high.  This very small U-shaped pullback is called the handle. Speculators become frantic, they must cover short positions to cut losses but the supply of stock for sale has been significantly curtailed because investors that bought at top#1 have liquidated positions.  The next session Wall Street analysts make positive comments and the stock surges to a new high on dramatically increased volume.  Weeks later the stock trades at substantial new highs.

How to calculate the target after breakout?

Details you should know.

This pattern marks the shortness of sellers. This one is characterized by a progressive reduction of the amplitude of the waves. Indeed, the pattern looks like a bearish channel on which the slope of the resistance is getting straight as far as the movement continues. In this pattern, the trend is bearish but sellers are struggling to keep control.

The target price is given by the lowest point that resulted in the formation of the wedge.

If you enjoyed reading this post, you can check out other related posts:
Financial Analysis 101